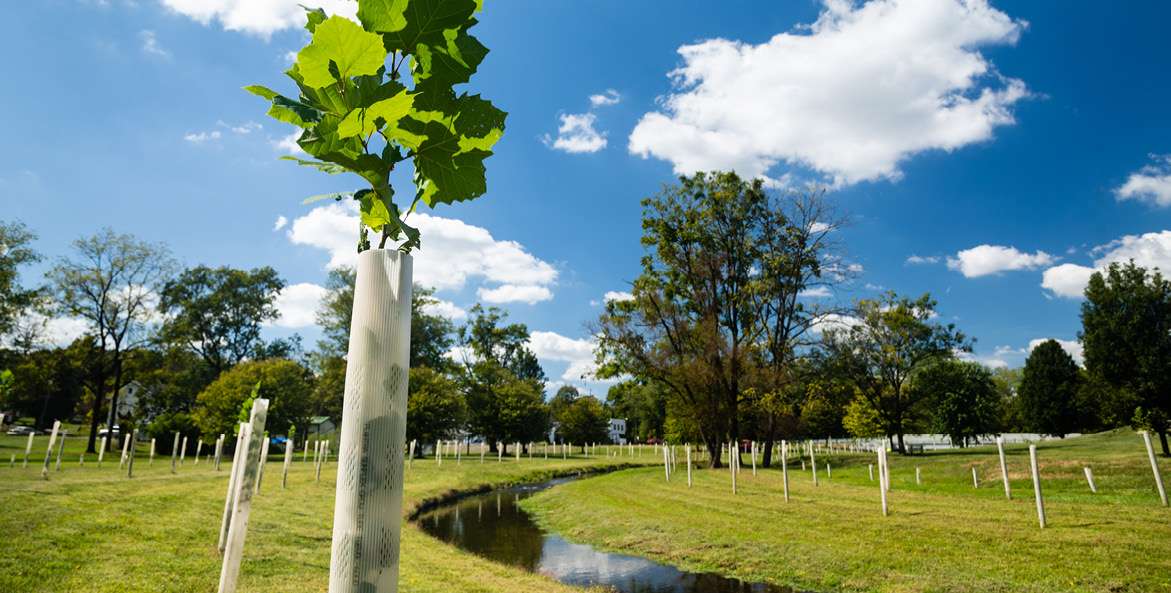 CBF’s latest assessment of Pennsylvania’s progress toward reaching its Clean Water Blueprint targets by 2025 reminds us that the Commonwealth faces steep challenges in picking up the pace of installing pollution-reduction measures and finding a way to pay for it. But there is a glimmer of hope for success.

According to the 2021 State of the Blueprint report, despite leading the watershed states with 4 million pounds of nitrogen-pollution reduction in 2020, Pennsylvania is not on track to achieve its 2025 pollution-reduction requirements. The Blueprint is a historic federal/state plan established in 2010 to restore water quality in the region’s rivers, streams, and Chesapeake Bay. It requires pollution limits allocated to each jurisdiction, as well as specific plans to meet those limits with reasonable assurance of success. There are two-year milestones for accountability, and a commitment from the U.S, Environmental Protection Agency (EPA) to impose consequences for failure. The states must have the programs and practices in place by 2025 that will result in a restored Bay.

For Pennsylvania, the challenges become more severe as the miles of rivers and streams harmed by pollution add up.

Roughly 27,886 miles of Pennsylvania waters are being harmed by pollution, according to the recently released Pennsylvania Department of Environmental Protection (DEP) Draft 2022 Integrated Water Quality Report.
That’s 2,418 miles more than in its 2020 report.The report found that 33 percent of Pennsylvania’s more than 85,000 miles of rivers and streams do not meet water quality standards for water supply, aquatic life, recreation, or fish consumption.

The top three major sources of water quality impairment identified in the 2022 report are:

CBF’s State of the Blueprint report also analyzed Maryland and Virginia and found that without significant acceleration of pollution reductions by the Bay states, the Blueprint will be yet another failed effort to restore the Chesapeake Bay. Together, Pennsylvania, Maryland, and Virginia account for about 90 percent of the Bay’s pollution.

Due to its lack of investments in financial and technical resources, Pennsylvania has historically languished in meeting its Blueprint commitments.
More than 90 percent of its remaining nitrogen pollution reductions must come from agriculture.

Pennsylvania is far off-track meeting targets for practices such as rotational grazing (rotating livestock frequently between pastures to allow fields time to regenerate) and the implementation of soil and water conservation and nutrient management plans on farms.

The Commonwealth is also not measuring up when it comes to planting forest buffers. Streamside forested buffers, with native trees and shrubs planted along waterways, are one of the most cost-effective practices for reducing nitrogen, phosphorus, and sediment pollution in both rural and urban landscapes. According to the report, Pennsylvania established just over a quarter of the buffers its two-year milestone commitment calls for by 2021.

On the bright side, Pennsylvania is on pace to meet its 2025 Blueprint targets for wastewater ahead of schedule, largely by installing better technology at treatment plants, enhancing the efficiency of existing treatment plant technologies, or purchasing credits that reduce their contribution to nitrogen and phosphorus pollution. While combined sewer overflows are a challenge for many communities, they represent less than 2 percent of Pennsylvania’s wastewater nitrogen loads to the Bay.

The Commonwealth’s farms have also done well in planting traditional cover crops grown off-season to keep soil and nutrients on the land, and implementing a tillage strategy that leaves more of the soil surface covered with the leaves and stems of cover crops when they are cut down.

The Holdup: Cleaner Water Comes with a Price

Pennsylvania recently submitted a revised Phase III Watershed Implementation Plan (WIP) which, according to the state, would achieve the states’ pollution reduction commitments by 2025 if fully implemented.

The original plan would have achieved only 75 percent of its nitrogen pollution-reduction goal of 32 million pounds. The original and amended plan both identify an annual funding shortfall of over $320 million.

However, it’s important to remember that dirty water also has a price—in the form of lost fertilizers and soil from farmland, unhealthy streams that don’t support fishing and swimming, and landscapes that are less resilient to extreme weather like floods.

Any plan is only as effective as the financial, technical, and oversight support made at the state and federal levels to implement it.

State and federal leaders need to follow-through on pending legislation that supports the many boots on the ground, landowners, and communities working hard every day to protect and restore local rivers and streams. They want to do more.

Without the commitment of Pennsylvania’s governor and General Assembly to provide sufficient funding, there is no reasonable assurance that the needed practices will be put on the ground.

Federal funding, like the recent Bipartisan Infrastructure Law, should be used to further invest in the state’s Clean Water Blueprint. It is also critical for EPA to hold states accountable for progress and impose consequences for failure to meet their clean water obligations.